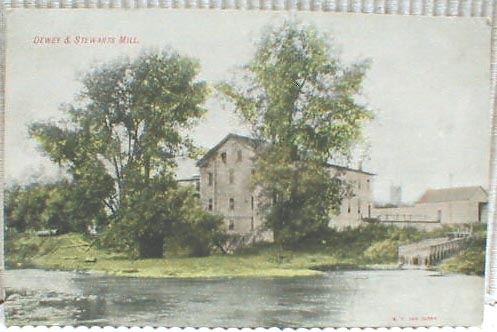 "The manufacturing interests of to-day are represented as follows: The flouring-mill of Messrs. Dewey & Stewart was established by them in 1850. It stands near the foot of the mill-race, below and on the opposite side from the site of the old grist-mill.

It began operations with two run of stones. Gradual additions have been made to its capacity until it now has six run of stones, and will flour sixty bushels of wheat per hour. Power is derived from both water and steam. They have in connection, also, a saw-and feed-mill, which is carried on in a building erected in 1863 as a saw- and plaster-mill."