A FREE STREET FAIR HELD IN 1897 AT OWOSSO, MICHIGAN 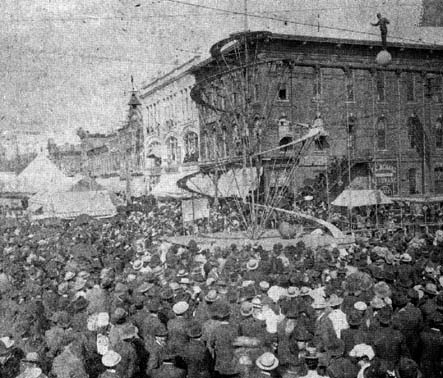 This is a FREE STREET FAIR AND BAND TOURNAMENT which took place from September 20th to September 23rd, 1897 at Owosso. The view looks northeast from the intersection of Main and North Washington. The premier attraction is FILLIAN who is performing a rolling globe (sometimes referred to as a walking globe) balancing act. He is slowly making his way along a narrow platform toward an inclined spiral by which he will cautiously descend to earth.

Previously he had climbed the spiral, walked the length of the three story high platform located in the middle of Main St. He then carefully turned around and you can see him headed back west toward the spiral ramp.

Please do not attempt this at home, as few have managed to go as high in the air as the 'steel nerved' FILLIAN.

In the old days, according to A. C. Gands, the globes were constructed of wood and covered with canvas for added strength. Nowadays they are molded from fiberglass or PVC plastic.

"Suicide Sandi", who used to be carried around the center ring of Mills Bros. Circus with her head in an elephant's mouth, writes that:

"This....(web page) brings back so many memories! In the 60's, I made my living as a circus performer, with mainly aerial, elephant, and showgirl duties, but also performed (VERY badly) in a globe act. I was the last girl in the act, and--in addition to NEVER being able to hop up on the globe without the Performance Director/Ringmaster (Bless His Heart!) holding the globe steady for me--only once during the entire season was I able to roll my globe up onto the first platform; I was always terrified it would shoot out from under me, and that I'd fall onto the platform and cause myself a great injury! I remember I did always feel, however, that if all I had to do was just stay on the ramp and keep rolling the globe up the incline, I'd do just fine. The globes we used were--to the best of my memory--aluminum; I remember they were very light in weight."

According to British author Charlie Holland, this act was quite popular a century ago. The performers were known as "Spiral Ascensionists". One of his recent publications contains an 1897 illustration of ALPHONSINE spiralling her way to a precarious height just as FILLIAN did that same year.

The above photo was a bit hard to reproduce because it is a newspaper picture found in an old issue of the OWOSSO ARGUS-PRESS. The original was shot by George Welte and was loaned to the paper by his grandson, G. B. Welte.

The following photo was obviously made a different year because FILLIAN'S platform has been erected on North Washington instead of Main St. Once again, the camera is positioned so that it looks to the northeast from near the Washington and Main intersection. 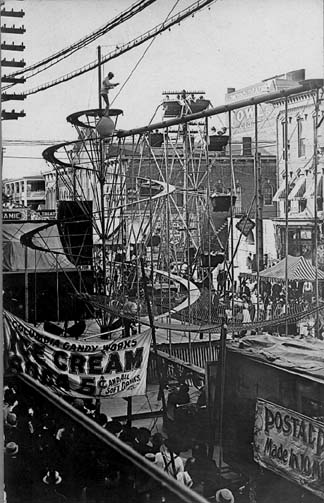 It is quite obvious that U.S. currency stretched much further around the turn of the century. The banner at the bottom of the picture advertises Ice Cream Sodas for only 5 cents! 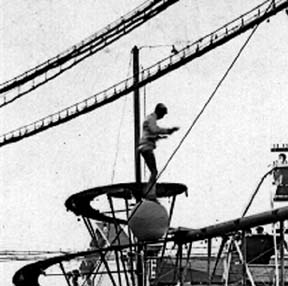 Here is a closeup view of FILLIAN gingerly climbing ever higher while balancing on the huge rolling globe. There is a safety net beneath the level platform but NONE is visible below the spiral where he does his climbing.

According to Norton B. Tillotson, he recalled in the late 1800's that when the tight rope walker came to Owosso, he stretched a rope from the roof of the old National Hotel at the corner of Main and Washington Streets, to the roof of the old Owosso Press, he would give only one preformance, then pass the hat. If the collection were satisfactory, he would repeat and add a few extra stunts.

One walker, after putting up the rope, made the mistake of taking up a collection before doing his stunt. He did not get enough to pay, to take his trunk to the station. He sure was mad. He had hard work packing that rope in his trunk; lots of boys tried to help by pulling in the wrong direction. That rope walker was sure glad to get out of town.

I remember Tom Horseman's Gigantic Minstrels. We always looked forward with pleasure to one of Tom's shows. The house was always sold out for each performance. There was a lot of fine talent for Tom to pick from, and he always had the best. There was George Bedford with his monologue, Stone and Hansman clog dancers, Ringe and Gates end men, and Tom with his fine solo. The professional Minstrel troop could not beat them.

When P.T. Barnum, Adam Forepaw and John Robins were the big circus men, they had only one ring shows at that time, but they were fine. The performers were the best in the land. You did not get kinks in your neck trying to look at three rings and two stages at the same time and so miss half the show.

There was always a grand circus parade with a large gilded band wagon drawn by four span of fine horses, elephants with the gaudy trappings, much plumbed ladies in a state of howdahs riding on the elephants, the many performers riding fine horses, the clown in his little donkey cart, and the many cages of wild animals.

The lion cage was always open with the fearless lion tamer sitting on a stool in one corner and the lion peacefully asleep in the other.

One could hear the tunes of the steam calliope miles away.

One year the circus sent up a hot air balloon and one of the acrobats did stunts on the trapeze fastened to the balloon. The balloon landed in the river back of the little grist mill. The water was not very deep, so the acrobat did not get wet....only very mad.

When the circus used the highways instead of the railroads, one year it arrived from Saginaw and lined up for the parade in front of our house. The drivers pumped our well and our neighbors dry, to water their horses. They took the lion out of one cage and put him on top of it. The elephants sampled our rose bushes.

In the 1870's the ministers and the narrow minded old women said that the circus was a sinful place to go and that all circus people were bad. And they were horrified to see the circus ladies wearing tights while performing on horseback. How shocking!

It took old P.T. Barnum to make them change their minds and decide that the circus was not so bad after all. It seems that the circus was obliged to a Sunday show and P.T. quickly gave a temperance lecture. That afternoon he packed the tents and even the ministers gave their approval of his show. He seemed to know the value of proper advertising. 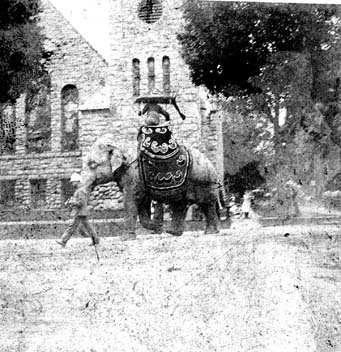 I recently located this very rare and VERY FADED photo of a RINGLING BROS. Street Parade which took place on August 26, 1898 in Owosso. The original print is so faint that the image is quite hard to discern with the naked eye.

Thanks to digital enhancement and colorization, we are now able obtain a fairly good view of this truly ancient illustration, below.

The elephant, with his white helmeted attendant, can be seen heading south on North Washington Street. The First Congregational Church, visible in the background, is still standing at the southwest corner of Washington and Williams Streets. 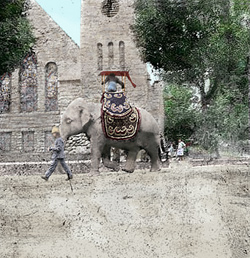 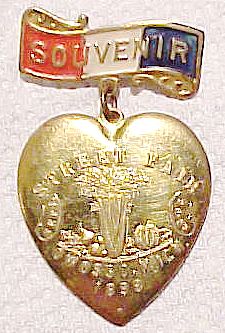 This is from the 1898 Street Fair in Owosso.