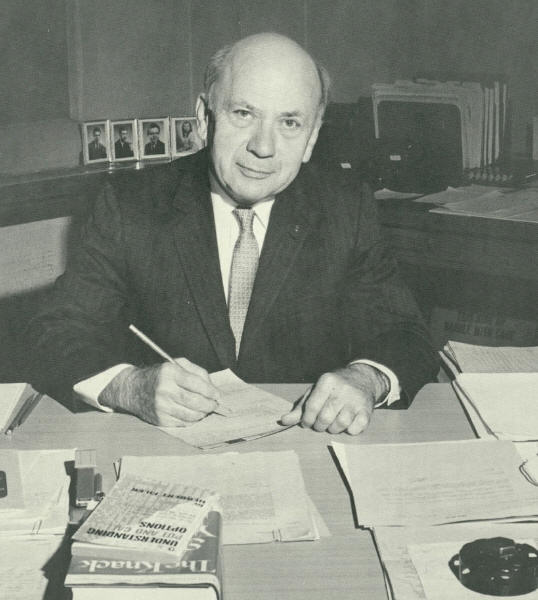 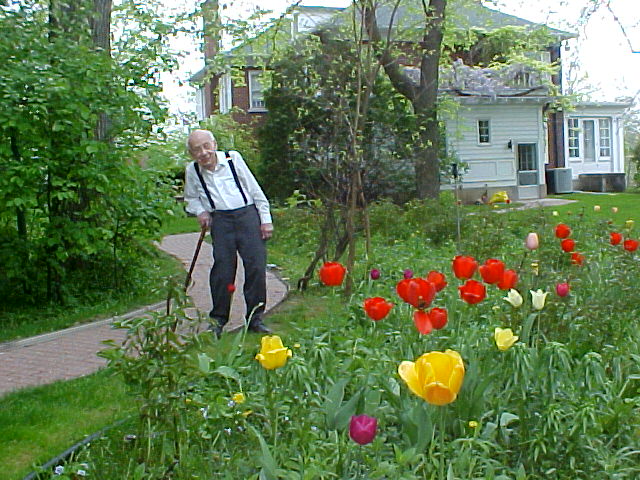 "You don't ever want to give up, if things don't work, try something else.
That's one of the biggest things I've learned in my life." .....George Hoddy 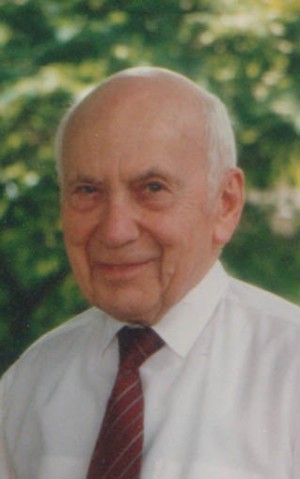 "Mr. George", age 105, of Owosso, passed away peacefully, surrounded by his family on Sunday, June 13, 2010, at Sparrow Health Systems in Lansing.

George was a very successful entrepreneur, industrialist and philanthropist and was the holder of several patents. He was the driving force, along with his brothers, of their manufacturing plants throughout several countries. George was the co-owner, CEO and President of Universal Electric Corporation here in Owosso for many decades.

Funeral Services were held at 11 a.m. Thursday, June 17, 2010, at the First Congregational Church, with Pastor James Eaton officiating and Pastors Ron Hutson and John Walworth co-officiating. Burial followed at Oak Hill Cemetery. A Masonic Service was be held at 7 p.m., Wednesday at the funeral home.

George was born on March 7, 1905, in Columbus, Ohio, the son of Arthur H. and Mary Elizabeth (Lutz) Hoddy. He served in the United States Army during World War II. He graduated from Ohio State University with a masters degree in engineering.

Survivors include his sons, John Hoddy and Peter Hoddy, both of San Diego, Calif. and Matthew (Patti) Hoddy of Bancroft; daughters, Elizabeth (Jim) Clark, Rebekah (Theodore) Smith and Melissa Hoddy, all of Owosso; 12 grandchildren; 16 great-grandchildren; one great-great-grandson; and many nieces, nephews and other loving family members and friends.

He was predeceased by his wife Lois; and three brothers.

Memorial contributions may be made to the charity of donor's choice.

George Warren Hoddy was born March 7, 1905, in Columbus, Ohio. "Mr. George" graduated from Ohio State University in 1926 and received degrees in electrical and mechanical engineering. He worked on his master's degree at Ohio State for two years in the field of 'small electric motors' which he pioneered there. George believed he could develop a better small motor then the heavy cast iron frame electric motor that ran his mother's washing machine. He dreamed of a tiny powerful motor within a light weight steel shell. And he set out to build one.

Charles F. Kettering, of GM fame, heard of his work and hired George. Later, Al Redmond of A.G. Redmond Company of Flint, Michigan hired George to assist in the development and manufacture of small electric motors that would operate windshield wipers and fans in the automotive field. Eventually the Redmond Company expanded and moved part of its operation to Owosso in the late 1930's. The new company was called the Owosso Metal Industries, located at 210-300 E. Monroe St. Owosso, with Ralph Redmond as president.

According to Glenn Baumhardt's book, "Redmond Etc" written in 1991, A.G. Redmond brought two key people into the company in the late 30's. They were George and Stan Hoddy, both electrical engineering graduates of Ohio State University in the mid 1920's. Glenn believed that the Hoddy's thought they were promised a "share" of the Redmond Company. But this never came to be.

In about 1942, after A.G. Redmond turned down an additional WWII government contract, George decided to start his own company since he had the contacts in Washington D.C. Along with his brother Ray, Joseph Woodard and Richard Turner began to talk about a new company. Soon after George's brother Stan, along with their brother Gerald, joined in the building of a company, based on people working together as a team toward a common goal.

Having designed and developed a special, governor controlled, gyro motor for use in military aircraft, the Hoddy's had a product, but no company name. The name Universal Electric was chosen and they soon received a contract for a small fractional motor from the U. S. Government, Defense Dept. The first order was from a government sub-contractor, R. C. Allen Products Inc. of Grand Rapids, MI. According to a July 15, 1942 invoice, Universal was to supply the Allen Co. with 30,000 Schwien type 24-volt D.C. motors at a total cost of $2.6 million. Another invoice dated Sept. 21, 1943 stated that Universal was to supply the Allen Co. with 60,000 Wastegate motors #G303AY2 at $44.19 each. Aircraft Instruments Contract #W20-017 AC 165. These motors were to be used in the B-17 bomber to control exhaust from each engine.

George got a loan of $20,000 from Owosso Savings Bank and rented a small 20' X 20' space in the old Woodard plant. He then bought some used equipment and started to fill his order for the government.

In the mean time, Mr. Redmond held him to his employment contract with Redmond Motors, in which he was to remain one more year. So George continued to work days at Redmonds and then every evening at his own plant.

For unknown reasons, the Owosso Savings Bank called in the $20,000 loan early. George recalls being very disappointed, but somehow "we came up with the money." When Hoddy handed the check to the bank officer, he said, "If you take this check, it may be the last one you get from Universal Electric". They took the check and untold millions of Universal dollars did not filter through that bank.

By 1943, the manufacturing operations were moved to 300 E. Main St. where the building was used as 'world headquarters' and Mr. George recalls that he hired 300 of employees in 'one day".

'Plant One' on E. Main St. was torn down in the mid 1990's to make room for the new Comstock Inn and Conference Center. 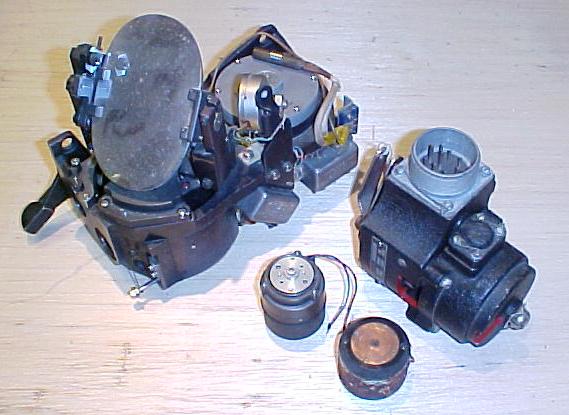 Left...A-4 Radar Bomb Sight....About 3,000 of these were produced at the Owosso plant for the Korean conflict. The pilot could see the target reflected off of the windshield of his F-84 Fighter plane.

Far Right.....Waste Gate Control motor for a supercharger on the Boeing B-17 Flying Fortress.

Many other Government Contracts followed. It was during the early beginnings, the company first gained national prominence for its war efforts and manufacturing excellence, and in 1944 and 1945, received the 'Army-Navy E Award' for excellence.

During the war years, George traveled secretly to New York each Thursday evening for an early Friday morning meeting to discuss war projects which utilized his motors. The team was actually involved with the Manhatten Project and these weekly meetings lasted for several years until the end of the war. Late Friday afternoon, George would returned by train to Owosso. He recalls working on at least 6 projects, including the three listed above. Fractional horsepower motors were used in many different applications on ships, aircraft and other 'Top Secret' projects, such as radar instruments which were 'state-of-the-art' technology at that time, many actually using early computers.

Below, is a special small motor which was used in a torpedo and had to last only 60 seconds. It cost $2,500 each to build and Universal Electric supplied these to Western Electric for a military contract during WWII. 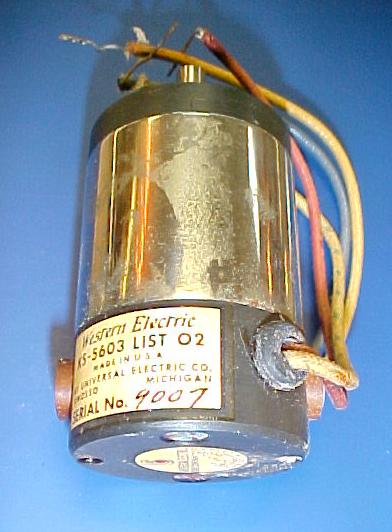 Universal produced millions of small electric motors used for many different applications, many being for domestic home appliances. Frational horsepower electric motors from 1/170 through three horsepower were custom engineered to the customer's needs. These were marketed through 1600 distributors in the U.S. and Canada, 22 factory warehouses and representative sales offices strategically located in all continents of the world.

Also plants in Faridibad, India, Gainsborough, England in 1973 and Bangkok, Thailand in 1990.

At one time, a Universal Electric motor was in one out ten homes in the U.S., and Universal was recognized as the world leader in the manufacture of fractional electric motors.

"The Universal Family" included over 2000 employees- 'associates' world wide, over 800 in Owosso. 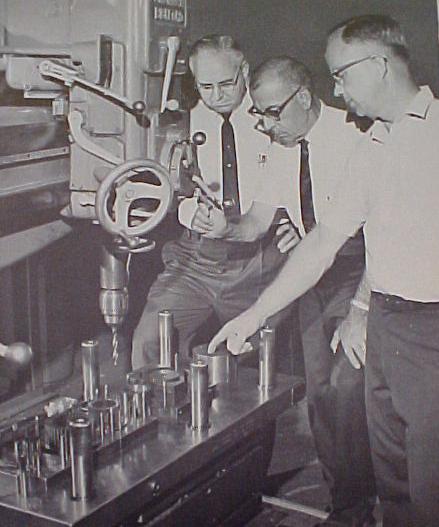 George attributes the companies success to hard work, treating the employees as family, surrounding yourself with quality management and giving the consumer what they wanted. George remembers his father Art, "He always opened the board meetings with prayer."

The company was merged with ESB, INc. in 1969 and became part of INCO, Ltd. in 1974. By 1981, members of Universal Electric Management and a group of investors purchased the company from INCO. In December 1986, Universal Electric Company was purchased by MagneTek. Bruce Nash became president, followed by William Lawson. Dick Batchelor followed Lawson as Executive V.P. and General Manager of MagneTek.

Here is a pic of the Council Tree, located at the northwest corner of Pine and Williams streets in Owosso, MI on George's property. Local indians were supposed to have met here in the early 1800's. Also, legend has it that Chief Wasso is buried here. 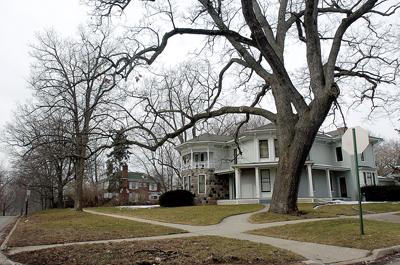 Here is George in 2006 at the old iron wheel located on the west end of the Universal Dr. plant

The wheel had been rested against this tree in the late 1800's and remains there today. 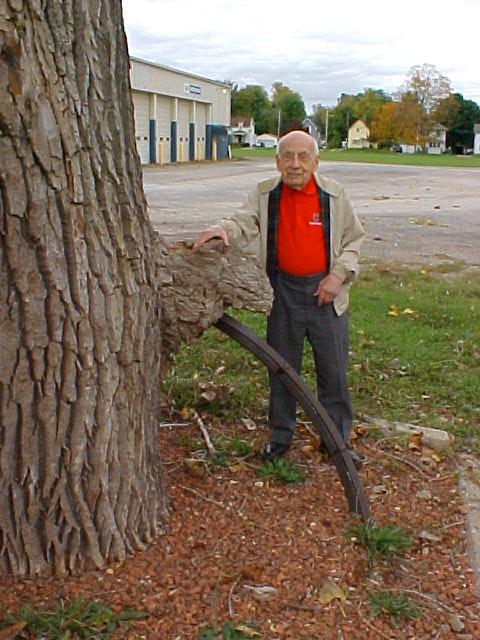 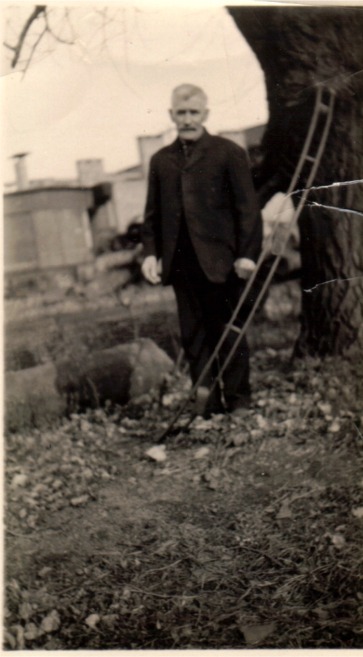 In late 1960's, George Hoddy was traveling through Shonto, AZ and visited his friend and Navaho Indian, Stub Manygoats. With thin blanket rolls, the two hiked out into the wilderness for many days. After crossing over the border into Utah, they discovered a cave tucked into a cliff wall and then climbed up and inspected it. The cave was located about 6 miles from Four Corners, Utah.

They found a few sealed clay pots which they acquired as souvenirs of their travels. Today, it is illegal to remove items from ancient places.

Years later, George opened the pots and discoved they contained squash seeds. He planted some of them and the vines grew to 15 feet long, great climbers. George had some of the orignal seeds carbon dated by the University of Arizona and they were determined to be 2000 years old.

George was living in the Mid-Michigan area when he planted the seeds in early to mid June. Some of the squash grew to 33 inches long and weighed up to 40 lbs. Most weighed around 20 -25 lbs. each.

George's friend Ivan Conger also planted some seeds and had similar results. He named the large squash "Hopi Groie" (I hope they grow).

Below, Ivan Conger with his large squash 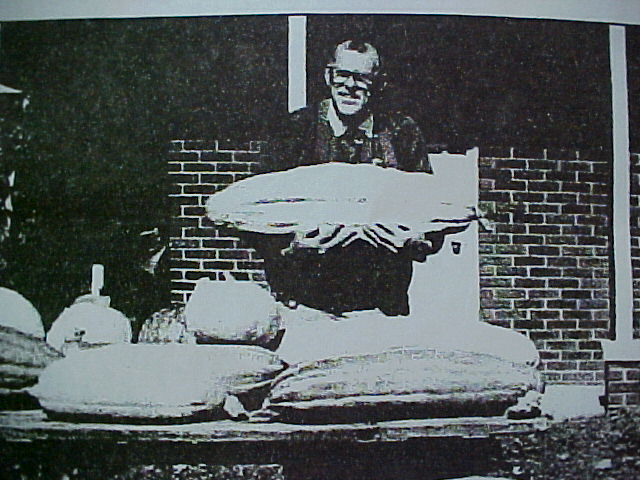 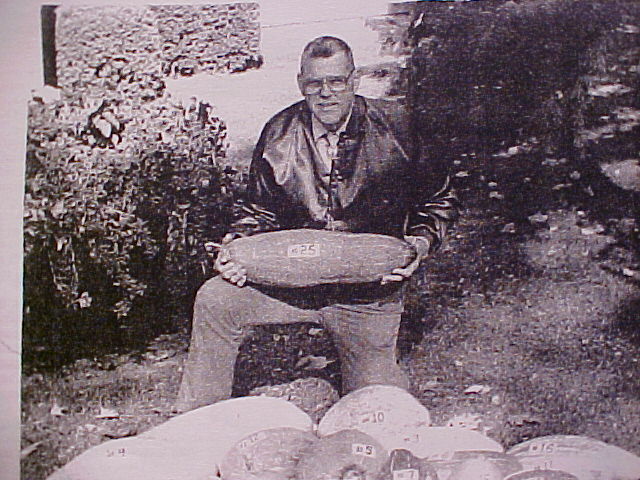 The large vines are quite vigorous and like to climb. Learn more about these pre pueblo Anasazi squash seeds here.