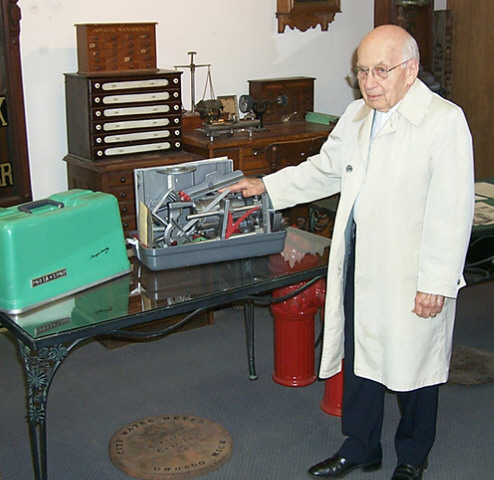 One project that was produced at Universal Electric Company of Owosso, MI was the Porta-Shop. Above, George Hoddy, company owner with his personal Port-Shop in 1998. 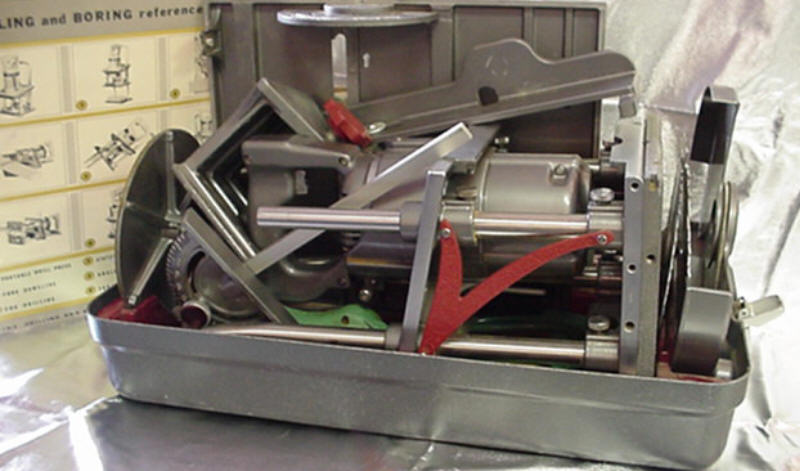 This portable shop unit could be assembled to form the following shop tools: 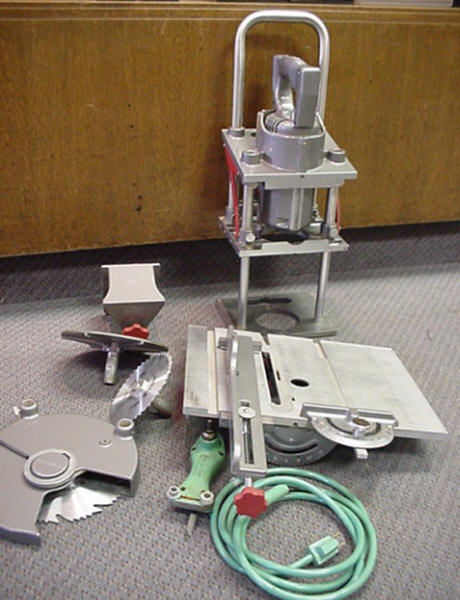 This easy to use and portable multi-tool was perfect for the new or experienced craftsman. It was invented by Larry Pugsley of Escondido, CA. According to George Hoddy, the amazing fact was that it was in production at the Owosso, MI plant from drawings, in less than 6 months. Also unique for the time, was the fiberglass carry case. Only about 5,000 of these were made during a five year period.

According to an Argus Press release on Sept. 26, 1961, Universal Electric of Owosso, MI purchased 50% interest in the Porta-Shop Precision Tool Corp. of Compton, CA. It was Universal's first consumer product ever made in their 19 year history. It was offered for sale for $299.95. They expected to produce 1,000 units per day. 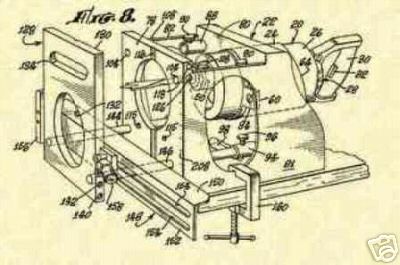 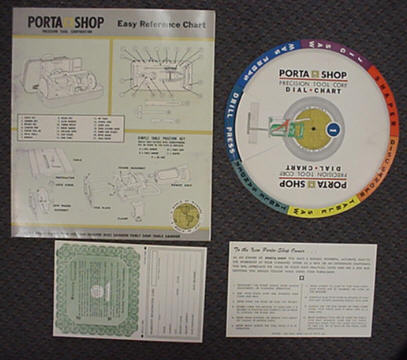 Sometime in the mid to late 1960's, Universal Electric sold out their interest in the Porta Shop project. The Pugsleys' retained part ownership.

According to John DeLuca, "I used to work for a Porta Shop dealer in Livonia, Michigan as a guild instructor in the mid to late 1960s (I was between 12-16 years old during that time, starting work there officially at age 14).

The sabre saw attachment was made by Machine Design Corp. in Los Gatos, CA. I don't know what happened to the remaining parts inventory when Porta Shop went under. At that time the units were being assembled by I & H Conveyor in Clio, MI.

Since replacement blades for the sabre saw are no longer available, you may have to modify blades available from other manufacturers like Black & Decker, Sears, etc.? We used to modify that long fat blade by trimming the width of it for more scroll-like work.

I knew the Pugsleys, Ron Jones, Frank who worked at the original Dearborn, Michigan site, George Csendes (sp?), there was a Jim (he designed some of the furniture kits), Lynn (accountant type person), a husband and wife team, can't remember all their names."

"The older Porta Shop style units that I have seen were green. My theory is that Univeral Electric did a limited run of the all gray units, probably an in-house thing. Note that the sabre saw and cords were always green. Also, the folder that comes with the unit has pictures of the older version of the unit I remember seeing...it was also green, though not plated...instead it had a dark grey metalic finish....not a paint or plating but some kind of metal finish/stain. I don't know how many of these were produced/sold, likely at the California location.

After the Universal Electric sold out, future units were manufactured with some parts that were leftover inventory from UE (boxes, sabre saws, small parts like knobs and the red pieces on the side, etc.) while other parts were ordered and produced in small lots....for example, table castings from Lifetime Design?"

*The serial number on the motor and frame should match. Units were purchased along with "lifetime" guild membership. The circle cutters were getting to be pretty rare. The other attachments - speed control, lathe attachment and chisels were still optional. The circle cutter and lathe pieces were made special for Porta Shop by Greenlee Tools (?) and were painted to match the green units. The hand speed control attachment was never around at the time I was there. I remember seeing one (and parts of others) in the warehouse/workshop and then I was given a brand new one by Jack Pugsley when they were moving back to California."

The company is out of business today and no spare parts are available.

NOTICE.......This Porta Shop is NOT related to the Porta Shop that was produced by Porter-Cable Corp. from the 1950's era.