This picture was taken on July 3, 1914 at the interurban station(113 S. Washington St.) in downtown Owosso, MI. The electric-powered passenger car went south from Owosso, thru Perry and Lansing to Jackson, MI. In town, it was powered by overhead lines, but in rural areas it used an electrified third rail.

Car #28 was rescued from demise, when it was found at Duck Lake, north of Albion, Michigan where it was being used as a cottage for many years. It has been restored and is on display at the Illinois Railway Museum in Union, Ill.

Because the interurban was electric, it ran very quietly, thus over the years many fatal and serious accidents occurred. Not only to city folk, but farmers livestock were not immune to the interurban either. 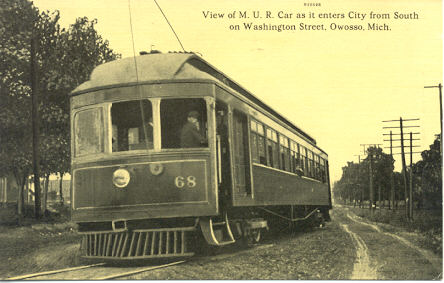 Here are some clippings taken from the Owosso Argus Press.

Milking by electricity through vacuum pressure is the modern method employed by Clayton Thomas, whose home farm is situated south of Owosso. Thomas is probably the only farmer between Owosso and Jackson who draws power from the M.U.T. to light has farm dwelling and barns, run his milking machines, washing machines and heat the electric flat iron in the house.

Corunna---Mandamus proceedings were filed in the circuit court Saturday by City Attorney A.E.Richards, asking the court to compel the M.U.T. and the M.U.R. to place their tracks in good condition and to run the old terminal, the Ann Arbor depot, besides living up to other provisions, which are set forth in the franchise which was given them by the city in the fall of 1895. 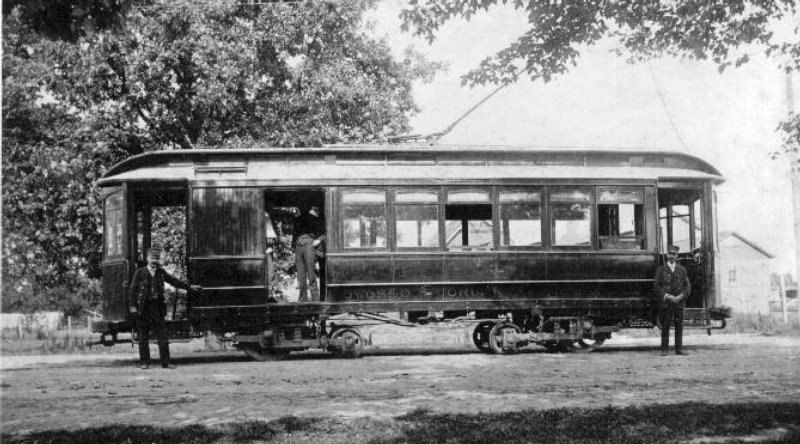 Corunna---Corunna was host Sunday at a surprise party perpetrated by the M.U.T., which even an effervescent society reporter could hardly term a delightful affair, since it cost city it's street railway service and the sinews therfor. Neither can it be said that the spirit of the affair was cordial. In fact, it was the culmination of warfare between the city and the railway corporation, in which the municipality has been the aggressor for several years.

Consternation was caused at the county seat when Corunna stuck it's head out the window Sunday morning on arising to note that over 100 laborers had invaded the county seat during the night and were well advanced with a work of Sunday desecration, which took the form of dismantling the dilapidated and much execrated street railway construction...

Last night at 7 o'clock, hardly a vestige of that part of the system lying in Corunna remained.

Corunna---The new electric line into this city is practically finished. Yesterday, a large gang of laborers cut the car onto the new track in Caledonia Township and the trip from Owosso to Corunna can now be made over an entirely new road which even at present is in better condition than the old track between the cities.

It will be some time before the roadbed can be made as smooth as disired, but there is such a difference between the ride over the new road and the old one that Corunna people have quite forgiven the M.U.T. for tearing up the old track on a Sunday early last summer.

Corunna---The construction work on the new Owosso & Corunna electric road will be completed Saturday afternoon. The construction gang is at work today taking down the trolley poles used for the old line and also placing tile along the track in Caledonia Township. The highway on both sides of the track between the cities has been graded.

The privilege of Free Riding in Owosso on M.U.T. cards, enjoyed by the Owosso Police for years, has been withdrawn. Saturday policemen who rode on the cars in the city had to pay their fares.

Corunna---A new name has been given the U-Boat No.701 which the Michigan Railways Company sees fit to keep in operation on it's Owosso-Corunna line. The car has been rechristened "Theodore Roosevelt" because it is such a rough rider.

The abandonment of the interurban line between Owosso and Lansing and its replacement with bus service is imminent in the opinion of the members of the Michigan Public Utilities Commission who yesterday set March 9 as the date of the hearing on the application of Wayne E. Taylor of this city for permission to operate bus service between the two cities.

Learn More About the Taylors and Indian Trail Bus Lines