The following ad appeared in the 1900 Owosso City Directory 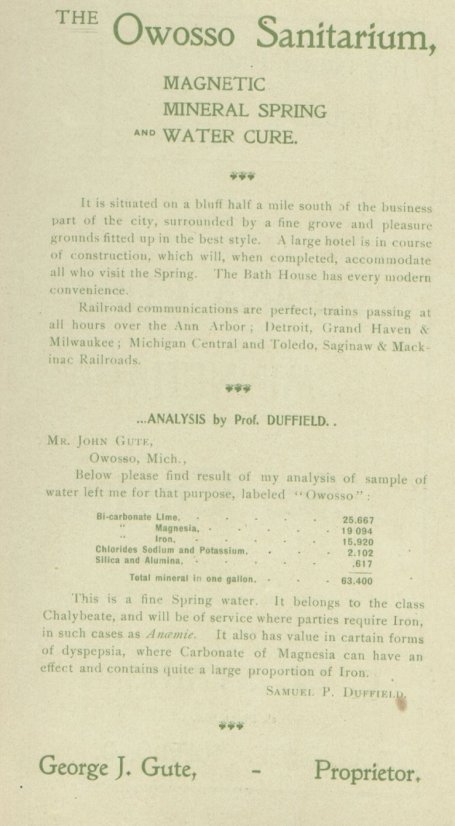 The "Caverns" located up on Gute Hill in Owosso, in the early years was used for the cooling of brewery supplies and later the site of the "Gute Mineral Baths".

The following photo of the"Caverns" show the arched celler, measuring 20 feet wide by 80 feet long and built in about 1855 into Gute's Hill. It was built in this location because of the natural large mineral spring and used to age brew and wine. 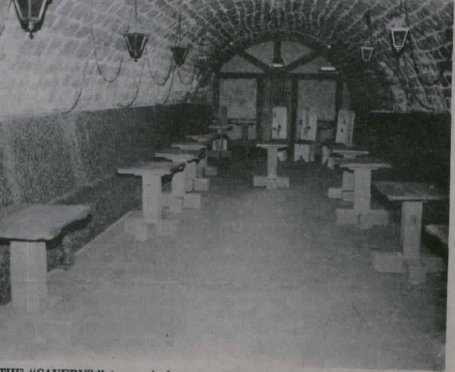 John Gute founded the Owosso Brewery in 1855, which included a social room with a full length brassrail, mirrors and an assorted stock of liquors. 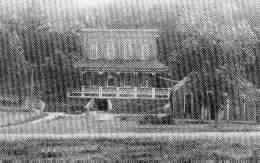 This photo shows the the main building and the "cavern" entrance can been seen below front porch.

It also had a dining room with a light studded ceiling, a kitchen and a ballroom with a 14-foot ceiling onthe upper floor above the cavern.

John Gute founded the Owosso Brewery in 1855 on Corunna Ave. In 1871, Gute developed the property on Gute Hill into a mineral bath company, because the water was to have 'curative powers'. Publicity by Gute at the time made great claims for the "health-giving waters." Instead of storing their beer in the cold caverns they heated the mineral springs within and used the baths for a health spa.

People began to visit the spring to bathe in its waters in hopes of curing rheumatism, arthritis and even tuberculosis. One women, reportedly came from Toronto, Canada, convinced she could be cured by bathing in the spring in Owosso.

That spring, or flowing well, however, had become nearly dry by 1910 and it is interesting to note that it was across the street from Oak Hill Cemetery, through which, at least some of that "great tasting spring water" would have been filtered.

In 1909, the German Arbeiter Society let the property go back to Gute Family, because of financial problems. It was later sold it to Bible Holiness Seminary and in 1949, the campus became the Owosso Bible College. In 1958, the Pilgrim Holiness Church changed the school's role from a seminary and Bible college to that of a four year Christian liberal arts college.

For the next several years, it existed primarily as a training school for ministers of the Pilgrim Holiness Church.

In 1962, the college's board voted to discontinue the Bible College within the school and organize it into a liberal arts college and made plans for expansion.

Many new buildings were built, including the gym/auditorium which was completed in 1963.

At this time they merged with the Eastern Pilgrim College who operated the college, but because they still did not possess accreditation by the North Central Accreditation Association, declining enrollment continued.

In June of 1970, the Owosso College cut all ties with the church sponsored affiliation. That fall, a 5 million dollar, five year plan was unvailed, to include construction of athletic fields and more educational buildings and residences.

In December 1971, the Owosso College accepted the Owosso Hotel as a gift and after refurbishing it, renamed it the Wesley Center.

And in 1972, Dr. Kenneth Armstrong took over the college and renamed it, John Wesley College of Owosso. Dr. Armstrong had dreams of many satellite colleges across the U.S., with Owosso, the world headquarters. In February of 1973, a 7 million dollar master plan was announced. Most of the buildings on the campus and the hotel and a few other downtown properties were extensively remodeled in the Country English motif.

1974 saw the needed accreditation and because of additional staff, instructors and innovative study techniques, including traveling Europe by luxury motorhome, many young people were drawn to John Wesley College.

But sadly, the board of trustees was forced to seek protection from creditors and investors under Chapter 11. It was placed in receivership, but by 1981 the reorganization efforts ended, even though millions of dollars had been invested by hundreds of people. Some investors said they had been lured by higher interest rate returns and lost their life savings.

The Gute Hill campus laid vacant and for sale, even a questionable cult-type group looked it over for possible acquisition. But it was through the efforts of George Hoddy that Baker College of Flint Michigan bought the 17 acre campus.

NOTE: This website is not affiliated with the City of Owosso or Baker College of Owosso.