Very soon after Michigan became a state the legislature passed "an act to provide for construction of certain works of internal improvement," by which a board of commissioners was authorized to cause surveys to be made for three railroad routs across the southern peninsula. These were called Central, Southern, and Northern Railroads.

In the course of time the Michigan Central and the Michigan southern were built, substantially as proposed in those early plans.

The Northern line was surveyed and located to run from St.Clair to Lake Michigan at the mouth of the Grand river, passing through the central part of Shiawassee County. More than sixty thousand dollars was expended in clearing and grading, considerable work being done in the Owosso area, but the plan was abandoned in 1841.

Many other railroad schemes began to attract public attention. In 1837, a company incorporated with a capitol stock of five hundred thousand dollars was given authority to construct a railroad "with a single or double track" from Detroit to Shiawassee village, by the way of Byron, but no part of the line was ever built.

Not until 1856 did a railroad become an accomplished fact. In that year was completed the line now known as the Detroit, Grand Haven & Milwaukee division of the grand Trunk system, the pioneer train reaching Owosso on the 1st. of July, amid a joyful demonstration by the inhabitants.

Eighteen years before, the eastern link of this road, known as the Detroit & Pontiac railroad, was completed as far as Royal Oak, the track being composed of strap rails, and even of wooden rails for part of the distance. In the fall of 1839 the road extended to Birmingham and steam was introduced as a motive power. In September of that year the Pontiac newspapers contained the advertisement of "Henry J. Buckley, agent and conductor," informing the public that the trains were running two trips a day between detroit and Birmingham and making connections at the latter place with a daily line of 'post coaches" for Pontiac and Flint, andsemi-weekly line to Lyons, on the Grand river, by way of Byron and DeWitt.

The Detroit & Milwaukee Railroad, as it was first named, enters the county in the township of Vernon, crossing the western boundary in Middledbury, nearly due west of Owosso. The stations on the line within the county are Durand, Vernon, Corunna, Owosso and Burton.

The line now called the Saginaw division of the Michigan Central Railroad was opened for traffic between Lansing and Owosso in November, 1862, the entire line being completed in 1867. Its route lies through the townships of Sciota, Bennington, Owosso and Rush, crossing that of the old Detroit and Milwaukee at Owosso.

The Chicago and Northwestern Railroad Company was incorporated in August 1874, the object of its formation being the construction of a line between Lansing and Flint, as a link in the through line between Port Huron and Chicago. This was completed and formally opened in February, 1877 and was operated as a part of "Chicago & Lake Huron" road. A few years later the entire line came into the possession of the Grand Trunk Company and it is now known as the Grand Trunk Western. It is an important part of that great system, having an immense freight traffic, and having a double track it's entire length. The road enters the county in Vernon Township. having a junction at Durand with three other lines, and passes out of the county at it's extreme southeastern corner, it's Shiawassee stations being Durand, Bancroft, Morrice, Perry and Shaftsburg.

The Cinncinnati, Saginaw and Mackinaw division of the Grand Trunk Railroad runs from Durand northward through the extreme eastern portion of the county to Bay City. This is an important branch of the main line and a good feeder, bringing considerable business from the properous sections of the county through which it passes.

The Toledo, Saginaw & Muskegon division of the Grand Trunk Railroad runs from Owosso to Muskegon, a distance of one hundred and seventeen miles. This line passes through a good section of country, many thriving towns and villages being on the line.

The Toledo,Ann Arbor & Northern Michigan Railroad was projected in 1885 by James Ashley and his sons, H.W. and James ashley. This road had a varied experience in building and but for the indomitable will of the projectors would have failed. It runs from Toledo, Ohio, in a northwesterly direction across the state to Frankfort, Michigan, and from that point immense steel ferries now transport heavy loaded trains across Lake Michigan to Menominee, Kewaunee, and Green Bay. The road has a large business in hauling ore and grain as well as other products.

The road now known as the Ann Arbor enters Shiawassee county in Burns township near the southeastern corner and cuts diagonally across the county, passing out of it through Fairfield township in the northwest corner. The stations in the county are Byron, Durand, Vernon, Corunna, Owosso and Carland. When the railroad was first built the division and shop[s were located at Owosso, which became an important railroad center.

In 1893 the division was removed to Durand and remained there for years, when it was returned to Owosso. The shops have grown in size and importance and built passenger and freight cars and also do all kinds of repair work, being splendidly equipped with all modern appliances. The road has been wisely managed and has become a very important piece of railroad property, which increases in value every year as the northern country through which it runs become better developed.

The Mech. and Store Dept. of the Ann Arbor Railroad won this award in 1930. The Ann Arbor was part of the Wabash Railroad at this time.This photo was taken in front of the old backshop at Owosso.

Ever Wondered What Those Whistle Signals Were All About ?

In 1858, the first Railroad into Lansing was from Owosso and it was known as the Ramshorn road which was owned by A.L. Williams of Owosso.

The railroad first came through Owosso in about 1856. By 1900, the Ann Arbor Railroad used the Owosso railyard for engine and car repairs. This 17 acre site is located east of the Owosso downtown area and on the south side of the Shiawassee River. Section 9 of Caledonia Township and Section 24 of Owosso Township.

A hugh fire at the Ann Arbor Car Shops killed two employees in Dec. of 1895.

This site is about 1/2 mile long from east to west and 500 feet wide. A residentual area lays to the south of the rail yards.

This site has gone through many phases of operation since its inception. Buildings including a round house have been erected and razed over the years. Facilities to accommodate the engine fuels include: wood, coal and now for diesel operations.

Buildings on the property today include an office used for operation and dispatch of trains, a car and engine repair shop, a metal and wood shop, as well as storage facilities for miscellaneous parts and a fuel storage tank farm.

The Ann Arbor Railroad terminated its operation in 1973 and its facility was acquired by the Grand Trunk Western Railroad. The Grand Trunk does not have an active use of this site.

On Thursday Nov. 15, 2001 Thomas Landris, 49, of Durand and Gary Chase, 58, of Owosso were killed in a train wreck. Engineer Landris and Conductor Chase were involved in a near head-on crash in a wooded area in Oakland County, Michigan, spilling about 3,000 gallons of diesel fuel. Two other employees of the Canadian National Railroad were injured. 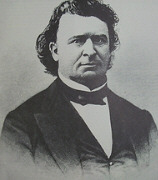 No Ann Arbor Steam Engines are known to exist today.

Another Pic of Engine #1

And another pic of #1611 taking on water

A man from Japan designed this engine and had several made which were shipped to Japan and the Wabash Railroad also ordered several. 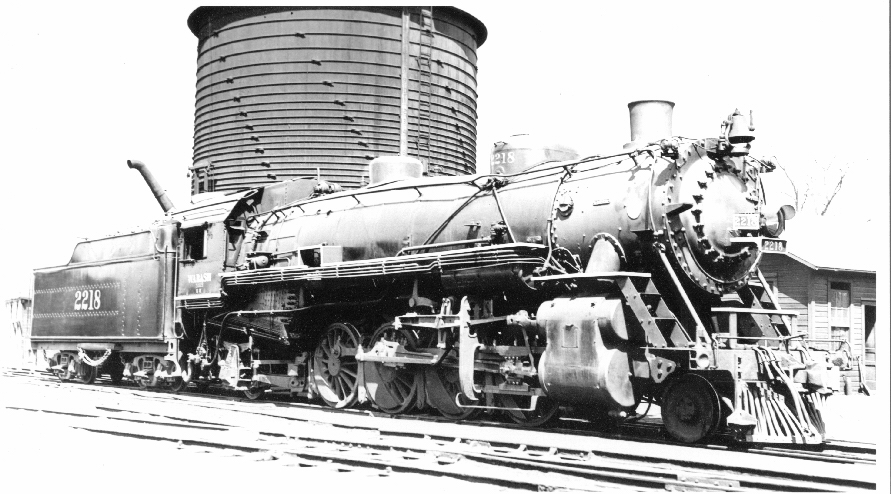 Scrapping Ann Arbor Engines at Owosso in the 1940's

The Ann Arbor's first diesel-electric was built in January of 1941, by the Whitcomb Locomotive Works, a subsidary of the baldwin Locomotive Works. The 44-tonner was purchased to work at the Owosso Yard as a one man engine. 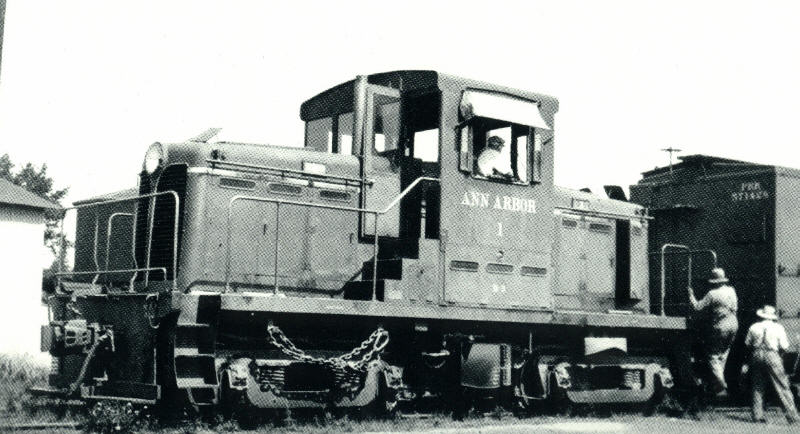 Another View of Marion Wreck

Lester Lundie, formerly of Owosso, who worked for and retired from the Ann Arbor Railroad on the wrecking crew, shown above, 6th gentleman from the right.

Building the Toledo, Ann Arbor & North Michigan Railroad with the Ann Arbor Bucyrus Steam Shovel circa 1890 near the north end of the line.

Last Update: 10-1-08
This is a personal website and is not affiliated with any Shiawassee County governmental agency, company, railroad or society.