Owosso has been fortunate to attract many large industries over the years including Woodard Furniture Co., Owosso Casket Co., Estey Manufacturing Co. (furniture), Owosso Carriage and Sleigh Co., Robbins Table Co. and the Owosso Manufacturing Co. These manufacturing firms of 100 years ago were replaced by electric motor and auto related manufacturers during the mid 1900s. And as Owosso looks to the new millenium, the product is much more diversified and the wood fabrication has been replaced by injection molded plastic. The industrial parks in Owosso and Corunna seem to be growing. 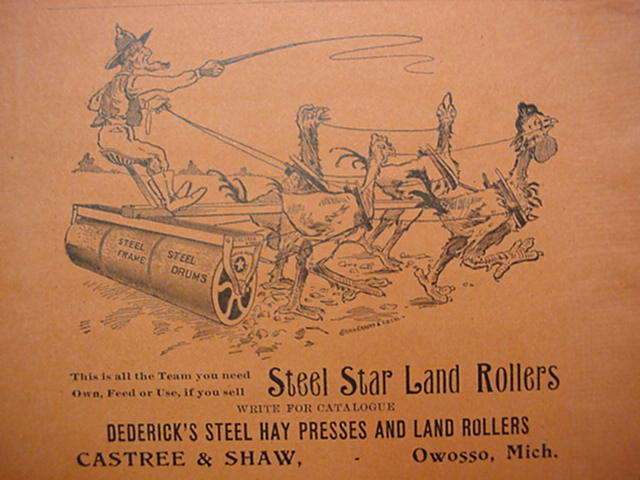 Taken from History of Shiawassee and Clinton Co's....1880

Among the manufacturing interests which once had an existence in Owosso, but have now passed away, was that carried on in the pioneer saw-mill erected by Daniel Ball & Co., in 1837; the grist-mill built by Ball, Green & Co., in 1839, which burned ten year later; Felix Caspers wool-carding and cloth-dressing works, established some time between 1840 and 1844, in a building now forming part Woodards furniture-manufactory and planing-mills; the woolen-mill which burned in 1867; and the building owned and occupied by Owosso Woolen Manufacturing Company, which was built in 1867, and burned in 1873. These mills all deserve a place in history. This 1875 map shows the Mill-Race and how it worked.

The manufacturing interests of today (1880) are represented as follows: The flouring-mill of Messers. Dewey & Stewart was established by them in 1850. It stands near the foot of the mill-race, below and on the opposite side from the site of the old grist-mill. It began operations with two run stones. Gradual additions have been made to its capacity until it now has six run stones, and will flour sixty bushels of wheat per hour. Power is derived from both water and steam. They have in connection, also, a saw-and feed-mill, which is carried on in a building erected in 1866 as a saw- and plaster-mill.

Messers. Fletcher & Roberts grist-mill was built in 1871, the present owners always having had a controlling interest. Steam-power is used, and the work-chiefly custom is performed by two run stones.

L. E. Woodards sash, blind, and door manufactory, in connection with his lumber-yard, had been operated by him since 1866. Previously it had been controlled by the Messer. White Brothers, who first established the business. Thirty men are employed, and his annual sales are from fifty thousand dollars to seventy five thousand dollars.

The Owosso Foundry and Machine Shop of Messers. Yeats & Osburn came into their possession in 1876. This is the site of the original furnace of foundry established by Daniel Gould & Co. previous to 1844. Meanwhile it has been owned, enlarged, and occupied by many parties. The business of the present consists in general repairing and the manufacture of pumps, plows, and various agricultural implements. Seven men are steadily employed, and power is derived from the Shiawassee River.

The Shiawassee Iron-Works in Owosso was established by Randolph L. Stewart about 1865. The present firm, Messers. Howell, Cossitt & Bateman, came into possession in 1869. Their business is general repairing, the manufacture of engines and agricultural implements. From five to ten men are employed. The building occupied is the one formerly used by Russell Young as a sash, door and blind manufactory.

George W. Oakes sash, door and blind manufactory of Owosso was established by himself, July 1, 1879. He employs six men.

The Owosso Handle Factory, now controlled by Mason Wood & Co., was established by Mason Wood and Charles Osborn in 1872. They continued the business about six months, when finding that with their facilities could not successfully compete with others, operations were discontinued. Mr. Wood improved the lathes in use, and again successfully engaged in the manufacture of all kinds of handles of irregular forms. He has since had several partners. In the fall of 1879, David Gould assumed an interest, and under the present firm name eight men are employed, and the most complete wood turning lathes in operation in the United State are daily turning out scores of perfect hickory handles. Axe-handles are a specialty, and their goods find ready sales in the various States from Maine to Texas.

Through the years, many shops have unionized and these Teamster's Dues Pins are from 1942.

The Estey Manufacturing Company, composed of Jacob Estey, of Brattleboro, Vt., D. M. Estey, and Charles E. Rigley, of Owosso, MI., was incorporated as such February 3, 1879, and the actual stock paid in at that date was fifty-three thousand three hundred and fifty dollars. This business was first established in 1868 by D. M. Estey, who controlled it until the formation of the present company. A factory for the manufacture of common bedsteads, a saw-mill, store, and village-lots are owed at West Haven, in New Haven township, a village which has sprung up since the projection of this enterprise. In Owosso City are situated the offices and warerooms of the company. Here also are manufactured ash and walnut chamber-suits, elegant in design and finish, under contract by the Messers. White Bros. Eighty men receive direct employment by the operations of this firm, and their manufactures, the sales of which amount to seventy-five thousand dollars yearly, are shipped to various points extending from Vermont to Missouri.

The Woodard Brothers furniture-manufactory has been controlled by them since August 1, 1866. The first edifice on the side of their buildings was the woolen-mill, built as early as 1844, and for a number of years carried on by Felix Casper and others. In 1855 it was changed into a manufactory of furniture, sash, doors, and blinds, and operated principally, we believe , by the Messers. White Bros.

The Messers. Woodards have thirty men in their employ. They manufacturer medium and fine grades of furniture, done in ash and walnut, and their sales aggregate twenty thousand to twenty-five thousand dollars yearly.

John Gute established the first brewery in the county in Owosso in 1855, and at first made present-use ale. During the past fifteen years attention has been chiefly devoted to the brewing of larger beer. The Owosso City Brewery has a capacity of two thousand barrels per-annum, and is now owned and operated by Albert Gute.

Incorporated 1905, Capital $26,000. This business was the successor of the oldest lumber company in the area being the Woodard Lumber Yard.

In August of 1895 this yard was purchased by Michelson and Mulhall and moved from West Main St, between Michigan Ave. and Shiawassee St. to the corner of elm and Genesee Streets. In 1905 W.F. Benkeman purchased the interest of Mr. Michelson. Besides lumber they sold coal. James Mulhall was served as president. This firm later became Mulhall Erb Lumber Co. and in the 1960's became Valley Lumber Co. owned by Norm Henry which included a couple more lumber yards in mid-Michigan area and a small chain of shoe stores from the 1960's throught the present time.

was incorporated in 1904, Capitol $10,000. Geo. Detwiler, President and Charles W. Jennings was Secretary. Albert Foster served as Treasurer. Located at 202-204 W. Main St. This company later moved to 409 W. Main St. In the 1940's, Milo Lyons and the Jennings family built a new funeral home at 520 W. Main St. across the street. The Scarlett family took over the old location and operated there for many years and today it remains in the family with the name of the Mowen Funeral Home. Jennings-Lyons continues their business at 520 W. Main St. owned by Service Corp.

Incorporated in 1900, Capitol $225,000. Nelson Kyer was the manager with the offices located in Ann Arbor, Michigan and an office on Washington St. at the Ann Arbor Railroad tracks.

This small company started in the 1890's and was Incorporated in 1905, with a Capitol $100,000. Louis Mueller was President and Charles was Vice-President. They built what today is known as the Matthews Building located at 300 W. Main St. Owosso. This brewery closed when Shiawassee County voted to 'go dry' in 1910.

In 1923, Joe Olsen constructed the new Capital Theatre and was responsible for many other buildings around the Owosso area including the Roach Canning Company near Gould St. and Corunna Ave. (524 Oakdale Ave.), the Walker Candy Company, later used by Redmond Motors (210 - 300 E. Monroe St.), the Masonic Temple building on Washington St. at Mason St, the Contagious Hospital at Memorial Hospital (sometimes called the Isolation Unit), the Byerly Grocery Warehouse and the Owosso Boiler Company building. Olsen also remodeled the State Savings Bank (southeast corner of Main and Washington Streets) and the home of Ed Zimmerman (southeast corner of Ball and King Streets among others.

William V. Robinson came to Owosso with the Independent Stove Co. in about 1908. By 1926, William owned the William V. Robinson Co. located at 1000 Bradley St. and they manufactured machinery equipment. He also invested in James H. VanPelt's Owosso Bronze Bearing Co. in the late 1920's located at 402 S. State St.

William left the Stove Company in the eary 1930's.

The Owosso Bronze Bearing Co. had a second factory at 609 S. Washington St. 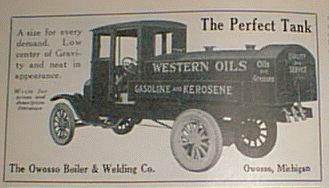 This company located on S. Washington St.
was owned by John Brandel and established in 1895. The above ad shows one of their quality built oil tanks. Later they had an office at 301 S. Lansing St. in Owosso.

Owosso Foundry Company was incorporated in 1928 at $50,000 and had leased the plant formerly occupied by the Standard Machine Co. on S. Washington St. in Owosso. 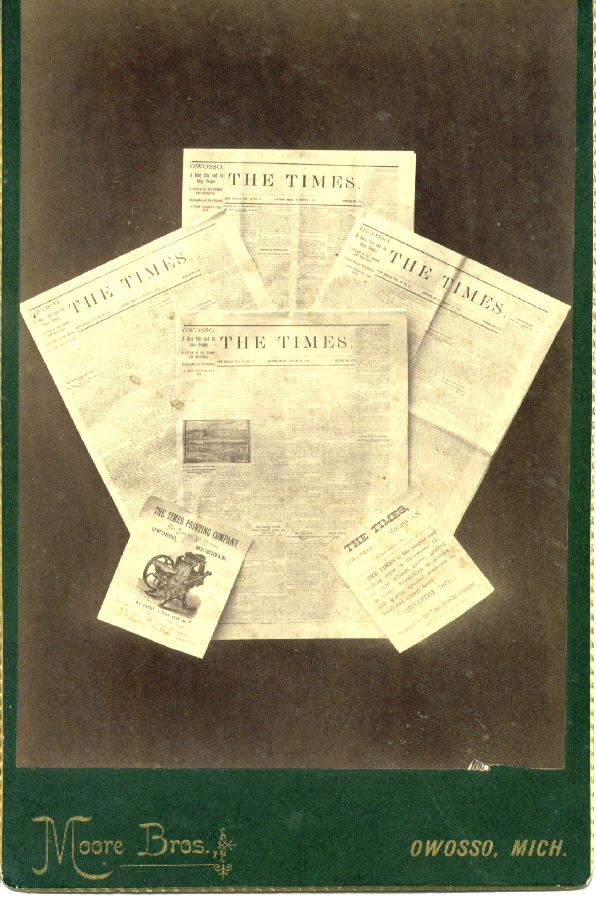 In April of 1897, W.L. Parker opened a marble and granite business located at 109 W. Mason St. In 1900 he found it necessary for larger quarters and erected a brick building at 500 S. Washington St. He employed 15 men and by 1907 he reported a steady increase in business each year.

His machinery included power polisher and pneumatic tools which were driven by a 25 HP motor and a traveling crane.

William V. Robinson Co. was located at 1000 Bradley St. and they manufactured machinery equipment. William V. Robinson came to Owosso with the Independent Stove Co. in about 1908. By 1926, he started this company and soon invested in the Owosso Bronze Bearing Co.

William left the Stove Company in the eary 1930's.

Every town seemed to have its share of wagon and sleigh builders in the 1850s. But by 1900, the number of manufacturing companies were thinning down, while the size of each remaining firm grew in size. By 1910 the automobile industry was well on its way. Henry Ford's company alone, was churning out the Model T at a rate of about 1000 a day.

There were two companies in Owosso who attemped the automobile field. The first was the Owosso Carriage Company which completed its car during the late summer of 1902 and continued experimenting with it for the next year.

In June 1903, their car was being tested, which was a two stroke 12 hp four-passenger touring model. It was designed by C.P. Malcolm, an engine manufacturer from Oxford who had built a few cars on his own in 1900.

The company announced that if it "proved a success, the making of carriages and cutters would be discontinued within a few months."

The Owosso Carriage Company continued in the horsedrawn trade and the manufacture of its auto was minimal at best.

A subsequent organization in December of 1909 was the Owosso Motor (later Owosso Motor Car) Company. J.I. Page of Owosso had built an experimental automobile that year which may have been considered for possible production. However, by 1910, this Owosso company announced its intention to enter the commercial truck field only.

C.V. Richardson and E.M. Clarke (formerly with the Reliance Truck Co.) were to oversee the technical department. The Horseless Age reported late in 1911 that after "manufacturing motor trucks, under certain handicaps, the Owosso Motor Car company has decided to wind up its affairs."

In the 1960's, a man by the name of Anderson, of Corunna, experimented with a very small auto. Only a prototype was ever built.

Between 1985 and 1990, the Owosso Motor Car Co. built 367 models of the Litestar / Pulse vehicles. Ed Butcher was company president.

Below you will find more history on some of these companies.